Aminah Alvi is swimming legend Pakistan in the future and yet to reach her teenage years but already has to her name 36 gold, 24 silver and 16 bronze medals to go with two national records.

There are dozens and dozens of medals neatly bunched together, even more participation certificates are cascaded strategically the assortment of laurels and insignia placed on a rustic divan is large enough to last several entire prize distribution ceremonies. In reality, it is the personal collection of just one, 12-year-old national-level swimmer.

It’s a remarkable achievement for any athlete, let alone someone who did not take to the water like the proverbial duck courtesy of respiratory difficulties and who does not have her roots in a swimming family.

Back in 2013 when the then eight-year-old Aminah was taken to a pool by her mother Ambreen Alvi, the two expected nothing more than a healthy activity to come out of her dipping experience. For Aminah to dabble into competitive swimming down the road was certainly not the plan.

“I took Aminah for swimming classes at the Karachi Gymkhana and told her coaches that she was only interested in learning not competing,” Ambreen

Long told to compete only with herself, not others, and groomed with that particular mind-set, it was understandable when she went unpicked at the first trials she ever took part in at her school Karachi Grammar School. 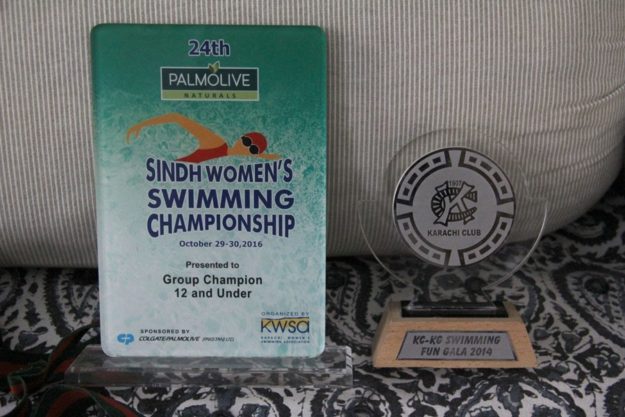 “In the end, the 12-member team was one swimmer short and so Aminah was called up,” recalls her mom.

The competitive genes, kept under wraps for months, finally kicked in and a monster was unleashed. This time, Aminah wouldn’t swim for personal betterment, but for the sole purpose of battering her competition.

The girl who didn’t make the cut at first, finished fourth in the backstroke event, just one shy of securing a podium finish at the first time of asking.

“That race gave me a lot of confidence and I started working harder to trim my timing,” says Aminah. “In the four years since, I’ve gone from swimming one round of 25m in a minute to completing four rounds (100m) in that same time.”

A promising sign it may have been, but her transformation into a medal-garnering machine was still some years and many setbacks away. 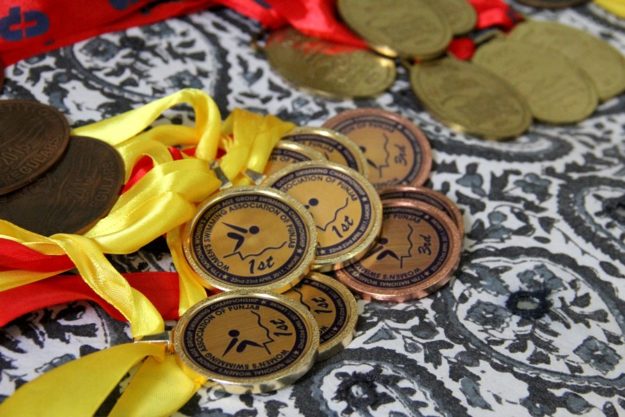 During this time, she would win some and lose others, but more importantly she would pit her wits against older and more experienced opponents a December birth meant that others from Aminah’s age group always enjoyed several months of physical maturity over her.

When podium finishes became a regular occurrence at local level, Aminah decided to step up and head to the national championships. It was time for a reality check.

“As improved as I was, I realised I was lacking the speed required for national level so I decided to skip the trials for Sindh team,” divulges Aminah.

Having outgrown her club competition but not quite there at the national level, Aminah was now trapped in no man’s land. This is when the Navy came to her rescue. 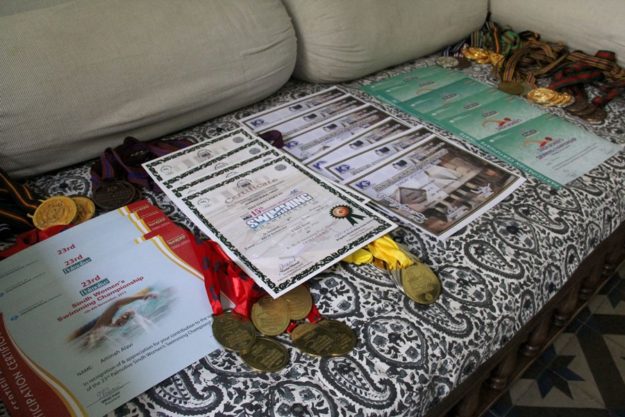 “The Navy swimming team has always been so supportive and has no politics in terms of team selection so I went there and was selected for the national championship,” she said. “My coach Zameerul Hassan then shortlisted six events based on my strengths and trained me accordingly.”

The tide turned at the national championships in 2016, where she finished fourth in 50m and 200m backstroke categories and sixth in 200m freestyle.

“I was not able to win any races but gained lot of experience since the national level is a step up. Players there are much stronger and faster, which gave me motivation to do more,” she said.

Later that year, at the Sindh Open, Aminah made two provisional records in the U12 100m individual medley and backstroke categories, winning five gold medals in all.

Then came her third attempt at national championships. A year earlier she had failed to find the podium in any event, yet the signs of future fireworks were there.

What no one knew, however, was that she would completely take over her age group at the 2017 National Championships, claiming six gold and three bronze medals no mean feat considering she was up against a number of foreign-based swimmers, who enjoy modern training facilities outside of Pakistan and come home only to plunder the trophies come competition time.

“It is really tough to compete against them [foreigners],” explains an irked Ambreen. “[For comparison,] in a 25m pool in Karachi, there are usually around 20 swimmers and just two coaches.”

Aminah chimes in to reveal how once during a stay in Canada she partook in a week-long camp and was blown away by the quality of facilities and level of detail in training.

“They had only two swimmers in a lane and a dedicated coach and also underwater cameras through which they analysed each movement; they told me how I should change my movement to increase my speed,” she adds. “We don’t have all this here due to which we fail at international events or lag behind when facing foreign-based competitors.”

Not too long ago, Ambreen wanted Aminah to have nothing to do with competitive swimming. But having seen her daughter’s desire and burgeoning medals tally, she is now her motivator-in-chief.

“We may have to seek help from abroad to make Aminah a better swimmer so that she can win for Pakistan from Pakistan,” says Ambreen.

With every passing year, Aminah goes further away from the timid girl that went to Karachi Gymkhana for the first time all that time ago. And as her competitive streak goes stronger, so does the feeling that Pakistan may have a swimming legend on its hands.

Trump campaign had at least 18 undisclosed contacts with Russians: sources

Indian Held Kashmir Shuts Down Social Networks for a Month

War against terrorism or War Against Islamic terrorism?